* In case of any delay in receiving the OTP, you may verify it later. Please proceed without verification.

Your mobile number is not registered with us. Please register your mobile no.

New Bombay, also referred to as Navi Mumbai happens to be one of the most planned cities of India. It is situated off the western coast of State Maharashtra in the Konkan division. Navi Mumbai has been divided into two separate parts, the Northern Navi Mumbai and the Southern Navi Mumbai. This division was done to develop the Panvel Mega City which covers the area of Kharghar to Uran. According to the provisional census of 2011, the population of Navi Mumbai is around 1,119, 477. Navi Mumbai is spread across the two districts of Raigad and Thane. All the nodes of Raigad that have been developed or under development are taken care of by CIDCO. 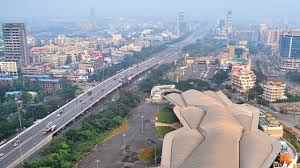 Navi Mumbai is also known as the entry point of Bombay. It has a beautiful location and amazing infrastructure. The housing here is also very affordable, and the pollution is low. The immigrants who are coming to or leaving Maharashtra prefer to stay in this area. They seek proper and healthy conditions of living no matter what hardships they face on a daily basis. Navi Mumbai has been ranked 13th among all the other cities by MoUD or the Union Ministry of Urban Development for hygiene and cleanliness. Navi Mumbai also offers a number of educational courses for the students for various streams that include medical science, engineering, hotel management, and interior designing. There are many students who move to Navi Mumbai to complete their education from here. Multinational companies like McDonald's, Bizerba, Siemens, Bureau Veritas, etc. have the office branches here, which makes Navi Mumbai one of the most active and busiest business hubs of the country.

The planning of the entire city was started on 1971. This involved the most skilled architects in the world like Charles Correa, Pravina Mehta, R.K Jha and Pravina Mehta. On March 17 of the year 1971, CIDCO or the City and Industrial Development Corporation was established. CIDCO was later responsible for carving out nodes that were named Karanjade, Airoli, Taloja, Ghansoli, Dronagiri, Kopar Khairane, Ulwe, Vashi, Kalamboli, Sanpada, New Panvel, Nerul, Kamothe, Kharghar, and CBD Belapur. CIDCO was also responsible for planning out and constructing all the rlwy stations, public spaces, and roads of Navi Mumbai. Certain areas were also commercially developed by CIDCO.

In the year 1973, the bridge of Vashi had been opened for the people residing in Vashi, Nerul, and CBD Belapur. Another highway, namely, the “Sion-Panvel” highway was also built. This highway helped in reducing the time that people took to travel from Panvel to Sion and vice versa. Initially, Navi Mumbai did not get any response. Major changes started to take place from the year 1990 after a wholesale market for agricultural produce was commissioned in Vashi. Also, the commuter railway track was constructed from Mankhurd to the Vashi area in 1992. These were the developments that led to the sudden growth of the economic activities, thereby increasing the population of Navi Mumbai.

There were certain issues as well. When the city was being planned, it was decided that affordable housing would be created for the people who could not afford to live in Mumbai. A decision was also taken that there would be no place for slum pockets in Navi Mumbai. But this plan eventually failed. The area of Southern Navi Mumbai is under development. Nodes like Kharghar, Panvel, Kalamboli, and Kamothe are experiencing the infrastructural developments because they are in proximity to the Navi Mumbai International Airport.

Mumbai is administered by three main bodies, the City and Industrial Development Corporation (CIDCO), the NMMC (or Navi Mumbai Municipal Corp.), and the Panvel Municipal Council (PMC). After the planning of the city was implemented, CIDCO was the main authority which looked into the development of the city and took care of the maintenance of the city. The nodes of Navi Mumbai which have been developed recently like Kamothe, Kharghar, Kalamboli and New Panvel are maintained by the City and Industrial Development Corporation. All these nodes are beyond Belapur, and they come under the district of Raigad.

In the year 1991, the Navi Mumbai Municipal Corporation was formed by the government to maintain a few developed nodes in Navi Mumbai. The NMMC was supposed to handle around 14 nodes in Mumbai for jurisdiction. The 9 nodes that NMMC maintains are Nerul, CBD Belapur, Vashi, Koparkhairane, Airoli, Digha, Sanpada, Turbhe, and Ghansoli. The NMMC is considered to be the richest municipal corporation of Maharashtra.

The Panvel Municipal Council looks after the administration of the Old Panvel city that has an area of 12.11 sq. Km and also has a population of around 1.8 lakh.

The basic infrastructure of Navi Mumbai is worth Rs 40 billion. The city depends for the electricity supply from a number of sources. The motoring conditions of the city are excellent, and there are many flyovers, parking lots as well as broad roads. The most important issue faced by the people of Navi Mumbai is the poor connectivity with the main city. There are only two roads and one rail line that links Navi Mumbai to Mumbai. There was a hovercraft service available from Vashi, but it did not become successful because the tickets were very costly and high maintenance was required. According to the reports, CIDCO plans on launching the hovercraft service from Airoli, Nerul, Belapur, and Vashi to the Gateway of India.

Navi Mumbai has many utility services, restaurants, banks, multiplexes and various other shops. Vashi is well known for a number of shopping malls that include Center One, City Center, Palm Beach Galleria, Inorbit Mall, and Raghuleela Mall. The renowned Little World Mall and the Glomax are located in Kharghar. There are many supermarkets that are spread in Navi Mumbai, and this includes More, Apna Bazaar, Spencer's, Daily Bazaar, Reliance Fresh, and so on. DMart has also launched around five hyper malls in the city of Navi Mumbai.

Cricket is the most important sport of Navi Mumbai. Nerul also has the International Cricket Ground which is known as DY Patil Stadium. It is well known for hosting the IPL T-20 which included the finals of IPL of the year 2008 and 2010. The DY Patil Stadium is team Mumbai’s home ground for Indian Super League. There is also a swimming pool of Olympic size in Nerul. Two golf courses with eighteen holes have been proposed by CIDCO in Kharghar and Nerul.